Audio Reference GmbH is an extremely broad-based distributor, which – depending on the brand – is active for Germany, Switzerland and Austria. The Hamburg-based company’s sales range includes a number of illustrious names in the industry, such as Meridian Audio, VPI Industries, Dan D’Agostino, European Audio Team, Krell, Miller & Kreisel, VTL, Nordost, Bassocontinuo, Velodyne Acoustics, Vicoustic and Wilson Audio Specialties. The products of the last-named company, Wilson Audio Specialties, are looked after both for Germany and Austria, but not for very long.

But even before the cooperation began, Mansour Mamaghani, Managing Director of Audio Reference, had a certain fondness for the high-end speaker systems of the US manufacturer. For him, they are among the most advanced sound transducers on the market and are also simply unmistakable thanks to their exquisite design.

Since April 2020, Audio Reference GmbH has been the responsible distributor for the solutions from Wilson Audio Specialties – sempre-audio.at reported – whereby Mansour Mamaghani, Managing Director of Audio Reference GmbH, fulfilled his heart’s desire by taking over the distribution. In a statement on the occasion of the inclusion of Wilson Audio in the distribution range, he therefore stated the following.

“I have been very familiar with the internationally renowned US brand Wilson Audio, manufacturer of the highest quality loudspeaker systems, since the early 1990s, including the incredibly competent and dedicated people behind Wilson Audio. Wilson Audio loudspeakers have always been among the best and most technically advanced in the entire high-end market for me.”

At the beginning of the partnership, Mansour Mamaghani outlined his goals: “We will do everything in our power to bring the Wilson Audio brand back to the importance it deserves in Germany and Austria.

And indeed, almost exactly two years later, Audio Reference GmbH can proudly announce that these efforts are bearing fruit. While the initial goal was to better develop the German and Austrian markets, the many years of expertise of the Hamburg-based company and an extremely knowledgeable team have achieved such successes in the last two years that they even stand comparison with the entire European market.

Wilson Audio Specialties loudspeakers are characterised by their futuristic design and the associated extraordinary accuracy in the temporal alignment of the individual drivers. The Wilson Audio flagship WAMM Master Chronosonic is a particularly impressive demonstration of this concept. The drivers are housed in individual, adjustable enclosures and can reproduce sound perfectly aligned with stunning clarity and reality with accurate phase.

In addition to colossal floorstanding loudspeaker systems, Wilson Audio Specialties naturally also has more compact sound transducers in its portfolio, such as the downright small but all the more impressive two-way compact loudspeaker Wilson Audio TuneTot, which, as our test showed, can definitely be called the ultimate high-end monitor. The Wilson Audio Sasha DAW passive floorstanding speaker also impressively presents the manufacturer’s comprehensive know-how at an adequate price.

For almost exactly two years now, Audio Reference GmbH has been responsible for distributing the products of the US high-end loudspeaker specialist Wilson Audio Specialties in Germany and Austria. Just how successful they have been is demonstrated by the award they have now received from Wilson Audio: Audio Reference GmbH is the “Number 1 European Distributor 2021” – sempre-audio.at congratulates them on this honour. 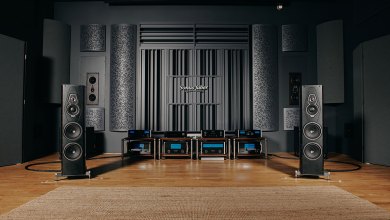